What's Wrong With This Picture?

The Leged of John Brown by Jacob Lawrence 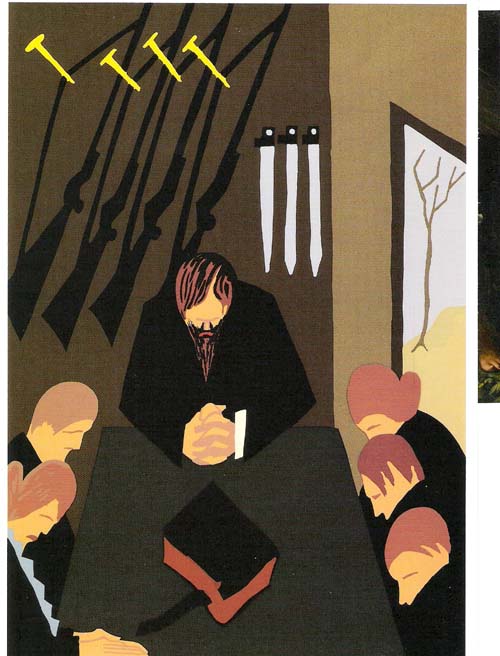 This painting jolts one looking at it for you instantly see the power of the sword juxtaposed with the power of God. John Brown, the historical figure in the center, is shown in a pious, prayerful pose. His slicked back hair, pointed beard, clenched fists, black suit and bowed head give him a severe profile.

No sooner do you see him but you see the four rifles and three swords hanging on the wall behind him. They are ready to be grabbed and used in a moment. The five people seated with John Brown are depicted in the same prayerful pose. If there was any doubt that they are in prayer to God we are confronted by the large Bible sitting front and center on the table.

After you take in the prayer scene your eye goes through the door to a spindly stick tree outside. It is pathetic and totally void of leaves and fruit. It is perhaps symbolic of a very deadly time in United States history -- slavery. Millions of black souls had been stolen from their homes in Africa to come and serve wealthy plantation owners that needed labor for their homes and fields.

Slavery divided the country. John Brown headed a very militant group of abolitionists ready to take matters into their own hands and free as many slaves as they could. Their method was the power of the sword with a little help from God.

He saw the miserable state of the slaves and desired to rise to their aide. He was passionate about his cause and willing to kill anyone that got in the way for the sake of it. Down the centuries Americans have not known whether to laud him or condemn him.

Using the power of the sword John Brown and his followers wanted the ability to control behavior. Controlling behavior with the sword is possible but it cannot change a heart. God's Kingdom and purposes are expanded by love -- one person at a time and from the inside out.

Man's kingdom fights earthly enemies with earthly battles. But the kingdom of God has no enemies for we are committed to loving them as friends. John Brown may have felt with his militia and arms that he had the right way to handle a terrible injustice. But however right we may be, without love we are simply displaying a religious version of the world and not the kingdom of God.

The kingdom of God always looks like Jesus and those in his church are simply called to manifest this kingdom here on earth. The weapons of our warfare are not rifles and swords but the power of love itself.

"But I tell you: Love your enemies and pray for those who persecute you."
Matthew 5:44