Sin and rebellion by Adam and Eve reversed just about everything that God wanted for man. In this study we'll look at what God originally wanted things to be like for man and earth -- and then what actually happened. If we don't understand God's original intention for our lives then even after our redemption we may wander around and never get at what God wanted for our life in the first place.

For example: God provided the sun and man would learn to collect the energy of its rays to produce electricity that would eventually be used to turn on lights and run machinery.

God then fulfilled his promise to man when they chose to disobey him.
Genesis 2:17b

Man didn't die physically that day but he did die spiritually. Remember that God had given Adam and Eve his own Holy Spirit to dwell within their spirits. This union of spirits allowed them to communicate with God and know his mind and purpose.
1 Corinthians 2:9-12

But God's Spirit can't dwell within sinful hearts and therefore the Holy Spirit had to leave man and the earth.

Without a relationship with God, man was on his own to fend for himself. He started to try and get from the earth and other men what he used to get from God.
Genesis 3:19 / 4:1-2 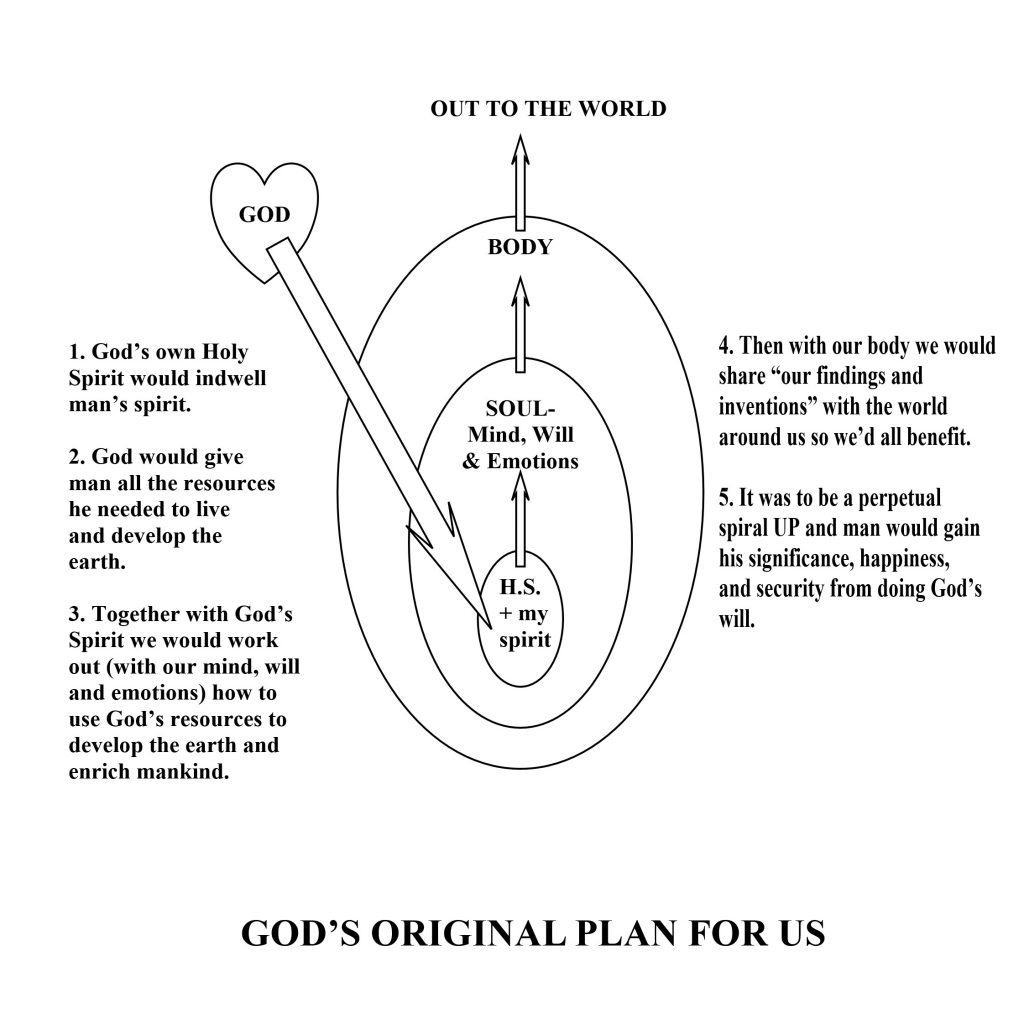 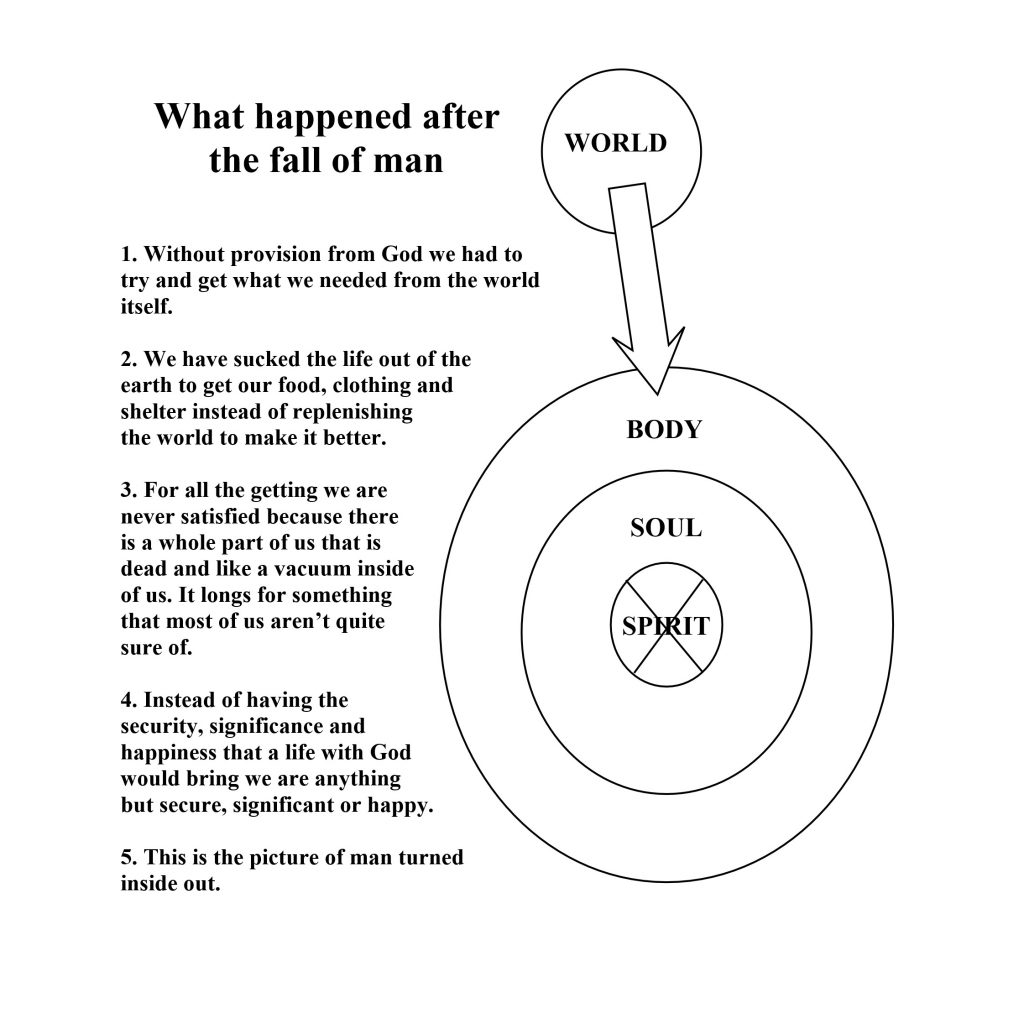 5. So the first thing man lost after eating from the forbidden tree of the knowledge of good and evil was their right-standing (or righteousness) with God. And this led to the second major loss. Their direct fellowship with God was cut off.
Reread Genesis 3:23-24

8. King David, who wrote most of the Psalms, gives a clear picture of what God wanted for man and what man settled for by deciding to live by his own knowledge of good and evil.
Psalm 81:10-16

12. With our loss of relationship to God we lost our rights as his children. This was our third great loss. It's the Holy Spirit dwelling within our own spirit that testifies to us that we are God's children.
Romans 8:16 / Galatians 4:6

We learned in #7 above that when the Holy Spirit left man's spirit, we died spiritually. We were now outside the family of God without the special rights and privileges that all children have that are part of the family. Man went from being carefree -- because they were fully provided for by God -- to living a life of hard and constant trial. We went from being without worry or fear to being full of guilty fears that led to excuses and blame because sin was now our master. As God's children we had his full protection but now we became subject to evil -- from other men or from the forces around us. We were now like orphans left to fend for ourselves.

13. Man's fourth and final loss was his kingdom. We were meant to rule the earth and we lost that rulership to Satan. Jesus acknowledged Satan as the ruler (or prince) of this world three times.
John 12:31 / John 14:30 / John 16:11

14. Instead of ruling, man has become enslaved to Satan and his demonic forces.
Ephesians 6:12

15. Instead of ruling in partnership with God, men and women partner together. But instead of the equal partnership we were meant to have, men would now rule over women and women would look to their husbands to do so.
Genesis 3:16b / Ephesians 5:21-24 / 1 Peter 3:1a

Thus began the struggle for power and control between men and women that exist today in our societies.

16. I know that all of this has been bad news and a bit overwhelming -- especially when you thought that mankind is basically good with a few bad apples. But that is not the conclusion given us in the Bible. What does God say?
Genesis 6:5 / Psalm 53:3 / Romans 3:23

God does not lie. He is clear about the path man has chosen -- independent from himself. Because of sin, man is no longer "basically good". All of us have been born with a sin nature and therefore we sin. Even the good that we do apart from God is not as He would have had it. As Isaiah said, "all our good deeds are as filthy rags".
Psalm 51:5

We can come to only one conclusion about man. He has turned inside out and operates by a personality that has become perverted apart from God -- that includes you and I.

We must be very clear about what man originally had and what he lost or redemption makes no sense.

First, Adam and Eve had righteousness or right standing with God. They were created morally neutral but also with free will. When Adam and Eve did the one thing that God told them they must not do they were making a choice to live independent from God.

Third, without a relationship with God we lost our rights as his children. Instead of receiving everything we would ever need from God we were now like orphans left to fend for ourselves.

Fourth, we lost our kingdom or our rulership over the earth to Satan. Man has become a slave to Satan and the earth now controls us rather than vis versa. Instead of being a partner with God to develop the earth, man partners with each other and this sets up a struggle for power and control between people.

Instead of getting from God all that we need to live and develop the earth, we now get what we need from the world and each other. Since we are all doing the same things (i.e. sucking the life out of the world) there is a lot of power grabs and control going on leading to conflicts and wars. And with all the grabbing and getting we are still not satisfied because we are missing the one relationship that makes everything worth while.

Back to Meaning and Purpose Table of Contents