The Journey To Wisdom

Adoration of the Magi by Guido Reni 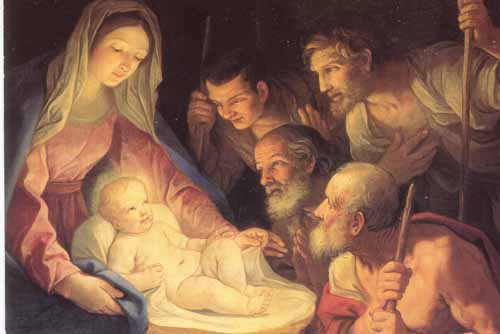 The focal point of this painting is the baby Jesus who is painted more like a "mature" baby than a new born. In the old style of painting he is "lighted" with a halo so that none of us miss the central theme. Mary, his mother, gently lifts the clothes surrounding her son as if to expose him fully to us. Her eyes are watchful of her son. To Mary, the miracle of her conception nine months earlier has just come to life and it is as though she is presenting Him on a platter to us.

Jesus is alert looking up at the four men staring intently at him. Even as a baby there is a look of wisdom about Him. But the look of the Magi (kings) and Joseph are what make this picture so precious. The oldest king in the forefront kneels and holds both hands on his staff for support, while he looks intently and soberly at the child. He is lost in thought.

To the left of the oldest king is another king slightly younger and also kneeling. His two hands are folded in prayer and respect. His lips part slightly as though wanting to speak but unable. His eyes have a tender, thoughtful gaze.

Above the second king, leaning over the others is the youngest of the kings. His right hand is over his heart while the left hand holds his staff. He too with his lips parted gazes in wonder at the child before him. "Who is this boy? and who will he become? How is it that the night star has led us directly to Him?"

Finally, there is the face of who I think is Joseph (Mary's husband). He is the young man with a simple face. He too looks on quietly in wonder and awe at the son he will now raise with Mary.

There is an old phrase used especially in the Old Testament that is lost to our generation. That phrase is "the fear of the Lord". Fear to us has always been a powerful negative emotion of dread, alarm, panic and terror. But, that is only one definition. Fear is also to have a profound reverence especially towards God. King Solomon in Proverbs 1:7 states that the "fear of the Lord" is the beginning of wisdom. Here in this tiny boy Almighty God had broken into our time and space universe. He had sent his son to represent himself to all men. These men and Mary were the first to see God in the flesh. No longer would God be a "force" to them somewhere in the "Heavens". He was here and now. He would live a life like everyone else -- or would he?

With awe we watched in the 1970's as man penetrated our universe to land on the moon. So too we can understand some of the wonder and awe these men and Mary felt at seeing the Son of God. Their faces embody what it is to "fear the Lord" -- to reverence and focus on Him.

With this little boy, these kings were going to begin a journey into real wisdom. Whatever they knew up until now could only take second place to the revelation of Jesus on this night. And so with the "fear of the Lord" on their faces all they can do is kneel and adore him. They regarded Christ with reverent admiration and worshiped him.

The Lord Jesus that they saw that night is the same Lord that the God of the universe wants to reveal personally to you and I. Although Jesus lived His life and was crucified over 2,000 years ago, he didn't stay in the grave. His Resurrection and victory over death allows his Holy Spirit to still be available to all men till the end of time. Will you stop to look at him? Will you hear his words to you? Will he be the start of real wisdom in your life?