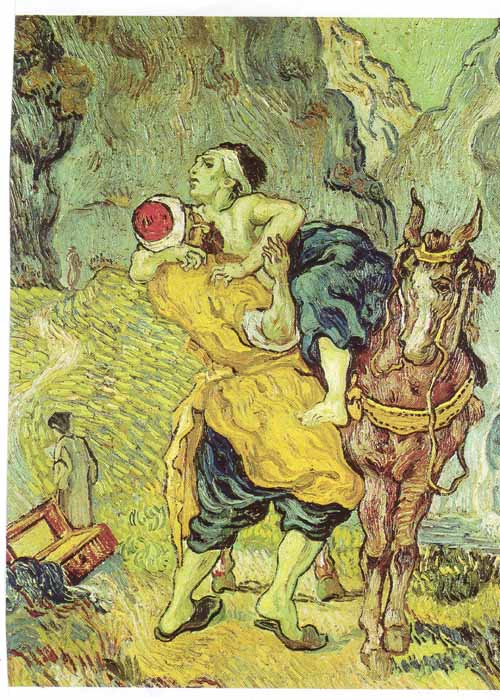 This is a turbulent and a peaceful picture all at the same time. It's a painting that illustrates a story that Jesus told about the good Samaritan. As the story goes a Jewish man was traveling to Jericho and he was attacked by bandits. They stripped him of clothes and money, beat him up and left him half dead beside the road. The empty suitcase lying open in the road attests to the theft.

While lying half dead by the road a Jewish priest came along. He saw the man but couldn't be bothered to help and so he crossed to the other side of the road and kept going. If you look way into the distance in this painting you see the very small figure of the priest almost disappearing.

After the priest came by a Levite or temple assistant happened along. He walked over and at least looked at the man but he too decided not to get involved. We see him just beyond the open suitcase, heading into the distance. Both priest and Levite are walking into the peaceful part of the picture -- along the green open road.

But now the story continues when a Samaritan happened along. (Samaritans were despised by the Jews.) In Luke 10:33-34 it says, " But a Samaritan, as he traveled, came where the man was; and when he saw him, he took pity on him. He went to him and bandaged his wounds, pouring on oil and wine. Then he put the man on his own donkey, took him to an inn and took care of him."

Van Gogh has drawn a head bandage around the victim and his upper body looks a sickly green. He is so weak that you can see the struggle it is for the strong Samaritan to get this man up on his horse. This part of the picture is full of struggle. Getting involved is never convenient, and always trying in some way. Even the horse looks shaken by the body being thrust on his back. But he stands steady.

As the story continues the good Samaritan set the Jew on his own horse, brought him to an inn and took care of him. He went the extra mile for a man that despised his race. Unlike the priest and Levite who are walking into the false peace of apathy and disinterest, the Samaritan has entered into a true peace given by God when we step out of self interest and into involvement with the people in our lives.

This true peace comes even in the midst of struggle and inconvenience. It is God's gift to us when we let God rule in our hearts and we do the right thing. The false peace of the priest and Levite will eventually lead them right out of the picture. They will make no difference to the world or to God.

We are not called to go out of our way to find trouble, but when we meet it it's our call to action. It's our opportunity to do the right thing and in the doing of it God Himself is honored.