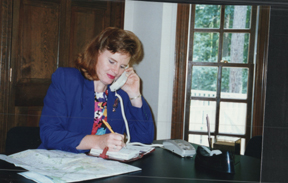 Depression of a Saleswoman

It was Tuesday morning and foreboding was already rolling over me. It came every Tuesday like clockwork. Tuesday was the day I had to start making phone calls to customers and potentials so I could have appointments for the next week. It was one of several dreaded activities I had to do every week.

As a Christian I knew I was supposed to trust God and live in joy and victory, but somehow when Tuesday came I would succumb to foreboding and depression. All it took was just one rejection and I'd be in a spiral heading down. I was allowing the enemy to grab hold of my mind and emotions and it was getting harder by the week to recover because I knew I had to start all over again the next week.

One thing I knew for sure was that this "yo-yo living" was wrong and I believed that God could show me a way through it. I literally cried out to God to find out how. Do you know that crying out to God is half the battle? He yearns for us to include him in everything we do. Most often we are so self-sufficient and independent that we don't need him. But when the time comes that we do need him, he is there and ready to meet us right where we're at. God graciously answered me and I want to share how he guided me concerning depression.

The first thing I saw was how Satan will use half-truths to get our thinking off balance. In my case, the rejection by one customer would trigger the thought that because they didn't want an appointment probably no one else would either. Then it would lead to thinking our product wasn't good -- it's not selling -- and then I would lose my confidence.

Sales people should be the most upbeat and optimistic people around. But here I'd be feeling alone and depressed in my car, dreading all the other calls I needed to make. But God was getting a hold on my thinking and his message to me was "to repent"! That word repent means to "change your thinking" and that takes practice.

I had to start thinking in new ways. For example, it might be true that one person may not sell our product well, but look at all the others that do sell it well. One person may not want an appointment because they have no money to spend. So instead of being a bad thing it can save both of us financial trouble. By not taking an appointment with them it gives me the time to pursue other potentials and thus grow my business.

THE NEED TO BE READY

The second thing God showed me was that I needed to be ready for these onslaughts of the enemy. Ephesians 6:11 tells us to put on the full armor of God so that we will be able to stand firm against all the strategies the devil will use against us. I was not fighting against a flesh and blood enemy. I needed armor that could protect me against these unseen powers -- like the belt of truth, the breastplate of righteousness, shoes of peace and the shield of faith to extinguish those flaming thoughts popping through my head. The one offensive piece of armor was to be the sword of the Spirit or the Word of God.

One week I decided that enough was enough. I started ahead of time to prepare for the next Tuesday when depression would grip me again. I recorded Bible verses so I could listen to myself proclaiming God's truth in my own voice. I bought some children's tapes with short praise songs to Jesus that were easy for me to sing along with. I found a tape of hymns to sing along with while I drove. I wrote out my own prayers directly from scripture so I could say them out loud. I was ready.

The next Tuesday, I was heading down the highway listening to my verses, singing the simple praise songs with the kids and proclaiming that Jesus had already overcome Satan. He said, "Let not your heart be troubled" -- so I refused to be afraid. By the time I had to start phoning I was actually excited to see what God would do.

That week was the beginning of a great reversal. It was the death to my depression rather than the death of another salesman! I don't mean to say that no one ever said "No" to me after that. They did. Any sales job is full of "No's" before you get some "Yes's". But week after week I stuck by God's truth. If all my plans fell through then I deliberately thanked Jesus that He must have better plans and I would trust him to show me what those were.

GOD'S PLAN ARE BETTER THAN OUR OWN

I remember one month when I had two weeks in a row when no one would give me an appointment! But instead of feeling bad I asked the Lord to show me what to do. He guided me to a new area that I had always wanted to go to but never had the time. Now, the Lord had opened up two weeks of time to go there. I was scared and excited at the same time.

I went to this new area and opened up seven new accounts in those two weeks. The average for new accounts is one per week. But, the Lord had gone ahead of me and blessed that time -- graciously showing me that if I trust Him He would come through for me one way or another.

If you're in sales or in business, it's likely you are facing some point of depression. In fact, all of us face some area where Satan can get our thinking off track and we get caught off guard by it. We don't always know when those times will come, but often we do know and we need to be ready. You can laugh at my tapes of kids singing praise songs but I think putting that tape on in my car drove the devil away faster than anything else.

I am now 20 years from this time in my career. There can still be anxiety and foreboding hanging over me on Tuesdays but I am quick to refuse it. I make a game to just get started at my phoning while trusting Jesus to do all the arranging. This is how I "cast my cares on Him". I have used this practical approach to other depression attacks as well. The more I refuse it from the start, the less I suffer from it. The more I speak the Word of God, the faster the devil must flee. I still listen to those kids and love to sing praise to Jesus with them in the car. Jesus is truly the victor over depression -- for me and for you. But we do need to be ready.