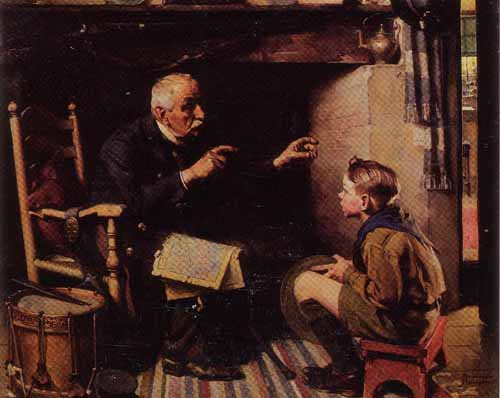 Here, in a rather dark room, Norman Rockwell has lit up the features of an older gentleman and a young boy. Our eyes go first to the older man who is animated in telling his young friend something. It appears he may have been a Civil War soldier. There are three signs indicating that.

A drum sits to the right of his rocking chair. Was it one that he might have sounded for the troops? Around the rocking chair armrest, hangs a leather belt with a large engraved buckle. Finally, the man himself wears a navy suit with gold buttons -- the color of the Union's uniform.

A map lies open on his lap. Is he telling the story of battles fought in the war? Whatever he is speaking about there is an intensity about him. He leans forward in his chair, his face stares intently at the boy and his hands gesture.

The boy sits below the man on a stool. He too wears a uniform of the boy scouts. His hat is off in respect and his eyes are fixed on the man's face. The boy's face shows more than interest. He is totally enthralled in what his teacher is telling him.

Being willing to listen is the first step to being teachable. To be a good listener indicates we have a humble heart that is open to what others have to say. A good listener encourages the teacher to teach and do it with excitement. A good teacher causes the student to want to listen and so one encourages the other.

Are you eager to learn from God? If you are, do you know that He encourages us by actually waking up our ears to listen to Him? The prophet Isaiah tells us that this is true. "He wakens me morning by morning, wakens my ear to listen like one being taught." Isaiah 50:4b

Be humble and open to learn and God will see that you get taught. He will open the ears of your understanding so you can hear and comprehend what He is telling you. Don't be a know-it-all. You can encourage God by having a humble heart that is willing to listen and obey.